If I could have planned it differently, I probably would not have chosen November as Charlie’s birth month. And that’s not just because there are already numerous Fall birthdays in the family, two major holidays and the prevalence of flu season. We always spend Thanksgiving and Christmas with our families and friends – but it is tough with a newborn. As much as you want to spend time with people, as a parent you’re secretly wondering how many of your loved ones are germ factories that didn’t get their flu shots, how you can tactfully eat and run so you don’t have to whip out a boob in front of everyone, and are preoccupied trying to calculate how much the little adventure is going to screw up the nighttime sleep schedule. (If it can even be considered a “schedule”….)

I know that family and friends want to see us, but sometimes I think the fact that it’s the holidays makes people forget that I just had a baby two weeks ago. And as easy as my recovery was/is, I’m still recovering. So, as much as it is probably disappointing for them if we decline an invitation this holiday season, it is not disappointing to me that I don’t have to remember to pack my hemorrhoid cream, maxi pads, breast pads and Charlie’s poop-tracker chart. Seriously, anything that doesn’t require me to put on real-people clothes or a bra is preferred in my book these days.
With all of this in mind, we were originally planning to spend Thanksgiving at home with Chinese food. But, once I learned that Thanksgiving was at my mom’s we decided, what the hell, Charlie already has his special T.G. outfit — might as well give him a real place to wear it! (If we could get there before he pooped or puked on it, that is.) Plus, there are no small children in my family any more, so we figured Charlie’s exposure to germs was likely to be pretty minimal. And, as far as whipping out my boob, considering that it was the house I grew up in it’s safe to say I’ve probably “whipped out” worse things there at some point in my life. So, into the diaper bag went the hemmy creams, pads for various leakage situations, and the poop chart, and off to Grandmother’s house we went.
Charlie did pretty good, considering he slept about 98% of the time we were there. I’d say it was the Tryptophan, but really it was to be expected considering most newborns sleep about 98% of the time anyway. Clearly he didn’t get the importance of his first major holiday, his first trip to Grammy’s house, or meeting all some of his great aunts and uncles and second cousins for the first time.

However, he did wake up to catch a glimpse of this thing called “Turkey” during dinner. But, he was clearly unimpressed considering his eyes were only open for about .5 seconds. It was a pretty uneventful day in the life of a 2.5 week old…. but one thing is for sure, he looked damn cute. 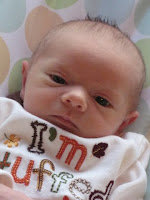 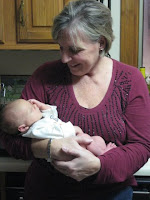 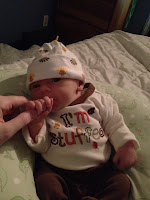 Charlie also got to meet his Uncle Chico, who surprisingly handled meeting his new nephew pretty well. He barked less at Charlie than he does at John Caras – so that is a win in my book. We may need to work on clarifying whose bed is whose though… 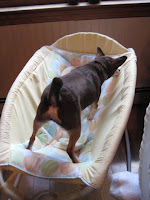 All in all, I would say it was a pretty great holiday!