We’ve had quite a few firsts this week! It all started on Sunday night, when Charlie went to sleep at around 11pm…and didn’t wake up until 6am! That’s right, you heard it here first folks, he slept through the night.

We have been insanely lucky that Charlie is such an easy baby, and a really good sleeper. His usual schedule is: asleep by 10:30pm, up at 3:30am to eat, up at 5:30am for a fresh diaper and a snack, then up for good at 8am. Maybe it’s because he knows his Mama is a biatch without her beauty rest, who knows, but whatever the reason – I’m glad we’ve got a sleeper on our hands!

The second first on the list was Charlie getting his 2 month shots, which included HepB, DTaP, Prevnar and Rotovirus. Big man did such a good job… the assistants laid him down, and Tristan and I hovered over him on the table. He LOVES to lay on his back, so he was all happy and kicking. Then, the attack happened… both legs, 3 shots – 2 in one and 1 in the other.

His handsome little face went so beat red – redder than I’ve ever seen it get from his worst cry. When Charlie gets super upset, which is rare, he does the “silent cry”. It starts with is bottom lip sticking out, followed by the cute whimper, followed by the full-on cry, followed by the red-faced, open-mouthed, soundless cry with actual, real-life tears streaming down his face. (I have to admit, cries were easier to take when he didn’t have tears yet!) It breaks my heart when he busts out the silent cry. But if the normal silent cry breaks it, the cry during his shots shattered it. The look in his eyes was like, “Mom, I trusted you. We were laying down having a grand ol’ time on this crinkly papered table, and then all of the sudden you let these weird people stab me in the legs with metal pokers. You just watched them do it, how could you!!” I know if he could speak, I’m certain that’s what he would have said.

I told Charlie that he will thank us when he doesn’t contract Polio, but that didn’t seem to make him feel much better. The only thing that lifted his spirits was a little time on the trusty boob, and then he was good to go. He was a little cranky for the rest of the day, but all in all he did awesome.

Now, onto first number three of the week – his first day at Big Boy day care!!! We selected a day care center that is right up the street from where we live. I know some people have asked me why we have him in day care, as opposed to being a stay-at-home-mom or having family members watch him. The truth is, being a SAHM is hard work (I was one for 8 weeks!!) but at the same time it was a little mind-numbing for me. I will contemplate it more when Charlie is older, and doing something other than sleep all day. And, also when we can afford it comfortably. Plus, we really want Charlie to get used to being with other children and in a place that really focuses on the important developmental milestones he needs to achieve.

We selected a center because we just didn’t think an in-home provider could give Charlie the one-on-one attention we wanted him to get as an infant, and we send him full-time because we want consistency for him – at least in the beginning. We selected the center right up the street because it is convenient, brand new, and the people are great. The down side is that it is expensive… yup, it costs more than our mortgage per month. But, it is worth it to give our little buddy the best care possible if it can’t be us providing it for him!

Well, Charlie did great on day one. His teachers said he was so cute and a great cuddler (obvie)! He had 4 wet diapers and 2 BM’s, in case you were concerned. Ha ha ha. He took some little naps, ate well, and was a little ball of happiness when I got there to pick him up at 4:45. He didn’t even forget who I was! 🙂

So, we’ve had a jam packed week already and it’s not even hump day yet! All of these experiences may seem trivial, but they are really exciting to a first time parent. In fact, I was reading through my first post tonight and I realized how amazing it will be to look back on this blog and remember this time. I had already forgotten so much about my birth experience – I am so glad I wrote it all down!

Every day, I can’t believe I am so lucky to be living this life. Becoming a mom was the best thing that ever happened to me!

P.S. Mom and Rick’s baby had a first on Sunday, too. Chico had (stole) his first binky! 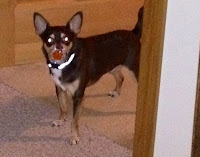