“Your little hands wrapped around my finger
And it’s so quiet in the world tonight
Your little eyelids flutter ’cause you’re dreaming
So I tuck you in, turn on your favorite night light

To you, everything’s funny
You got nothing to regret
I’d give all I have, honey
If you could stay like that”

I’m pretty sure that becoming a mother speeds up time. I cannot believe that in a week, Charlie is going to be 4 months old. Hell, I still can’t believe I have a baby…that we made him, and now I am responsible for his well-being. I still have dreams that I forgot to do my math homework, and that I accidentally missed softball try outs.

But the days, they are just flying by. It probably doesn’t help that our new schedule involves being in bed by Jeopardy. Yes, that’s right, yours truly no longer stays up all hours of the night. But, if we don’t start the “nigh-nigh” process early, we will dearly pay when 3:30 a.m. hits and someone wants a boobie. So, we head for bed by 7:30 pm…wake up by 7 am… head to work for 8 hours… playtime, bath time, repeat. It’s this pattern that makes the days seem like minutes.

I can’t believe how much Big Man has changed in these few short months. It seems like yesterday that he would curl up in my arms, still kind of stuck in the fetal position, and I could imagine how neatly he fit inside my belly. Now, I look at him and think “how the hell did you come outta me?!” Oh, how I wish he wouldn’t grow up so fast.

He is newly obsessed with his mouth and tongue. If the tongue isn’t out, the fingers/hand is in the mouth. My personal favorite is when he sticks his hand so far in, he gags himself and then goes back for more.

He is getting better at tummy time, but it’s still pretty much a hate/hate relationship! To help with his neck and head control (which he has pretty much mastered), we work on baby sit-ups instead. That’s because this is usually what happens on the belly:

He has yet to master the roll-over… but you can’t really blame him, since every time we try to practice he gets 2 crazy dogs that try to steam roll him for a treat. (Note to dog owners: Teaching your dog to roll over by saying “roll over” is going to make it pretty tough on you when you want to get your baby to learn to roll over. Maybe use a different code word.)

Knowing that rolling over leads to crawling, which leads to walking – I am in no rush for him to master this task. He is super close though… we expect this milestone to happen within the next week or so if we keep working on it.

But, Charlie has such good head control that, in fact, he can almost sit up on his own. This was his first attempt at unassisted sitting:

He is also learning of his ability to actually make his hands do stuff. He has been grabbing at things (i.e. hair, glasses, clothing, boobs, etc.) for quite some time. But, I happened to catch on video the first time I realized he grabbed onto an object with the intention of doing something with it – putting it in his mouth. (Per new obsession #1 above.)

He is using this new-found hand-eye-mouth coordination to become more independent:

Pretty soon, he’s going to be able to actually say the caption above. About a month ago, he began really paying attention to our lips when we would speak to him. You could tell he was trying to figure it out… like, Okay, these people move their lips and that sound comes out. I don’t know what the hell they’re saying, but I’m pretty sure I can make sound come out too! He’s working on refining these skills:

But, my favorite sound of all time has got to be his little baby laugh:

The way this kid has grown and is developing astonishes me. It’s like he learns something new every day. They say that the 4 month ages marks a huge cognitive and emotional turning point for babies, as they become much more aware of the world around them. This often leads to what they call the “4 month wakeful period.” So, just when you’ve got what you think is a good sleeper (like Charlie was), you suddenly find yourself asking why you didn’t knock on wood when you were bragging about how you never experienced that “new mom” sleep deprivation feeling.

According to research, babies are born with 100 billion brain cells. These cells will be connected in networks as the brain matures and by the third birthday, the brain will have formed about 1000 trillion connections. By the looks of it, Charlie is well on his way to making those connections. And, I love watching it happen in front of my eyes. This child is purely amazing.

But, there’s one thing we still just can’t agree on. 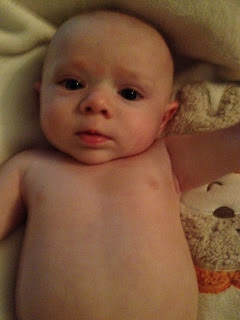 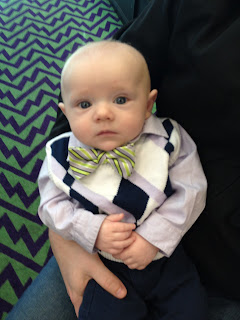