So, I’ve been a little MIA lately. Sorry it has been two weeks – where the hell is the time? Don’t worry, I’m not going to go all Jessie Spano on you. I’m sure you all assumed it was for a good reason, right?

Well, you were right. First, I became a SAHM. Second, I decided to finally finish the website I had been working on for a year – www.momsinmaine.com. Third, I got a job offer for an awesome opportunity that is a great step for my career! So, bye bye SAHM-hood.

It’s insane what can happen in two weeks in the life of a baby. I thought I’d do a short post just to catch you up, before my customary top 10 list coming later this week.

Since my last post, Charlie has become a rolling machine. As in, I put him down on his activity mat and ten seconds later we have this: 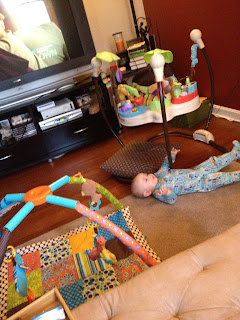 Additionally, we’ve learned this little trick called “sitting.” Meaning, we sit and type to our friends on our laptop: 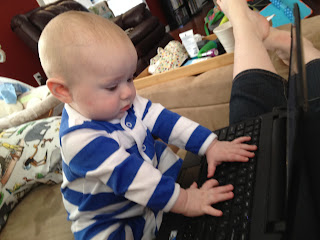 We’ve also begun the process of transitioning to the crib. We have mostly failed at this task because A.) Charlie is a boob monster and needs to be nursed to sleep; and B.) Crib sleep means tummy sleep for Charlie, which makes Mom crazy. I find it easier to allow the child to fall asleep within my view, and then say “Oh, let’s just put him in the Rock ‘N Play since he’s already asleep.” I mean, he’s just so comfortable there after all: 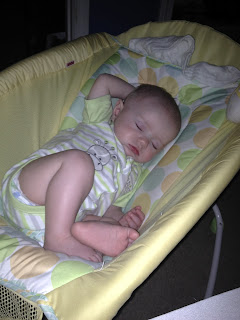 Tomorrow is Charlie’s half birthday and I’m just sitting here wondering where the time has gone. Yesterday he was just a lima bean in my uterus…wasn’t that yesterday? Feels like it.

Even with my new site, which I am spending most of my spare time on, I am planning to continue writing this blog. I envision this blog being much more personal, like it has been all along. Whereas my new website and new blog, which you can read here, focuses more on specific things that I know other Maine moms can and will relate too. Think of it as here I’ll talk about my hemorrhoids. There I’ll just reference that lots of mom get hemorrhoids. Get my drift?

So, that’s my update for now. As I said, I’ll be following up soon with my traditional, monthly top 10. It’s gonna be a good one…stay tuned!