Since we last “spoke”, I celebrated my first Mother’s Day! Charlie and Tristan did such a great job. It started with sleeping in, followed by breakfast in bed, homemade and heartfelt cards, a new bead for my bracelet, and my favorite candies from Len Libby’s! I also got flowers from my own Momma and a very sweet card from my Sister. All in all, the day made me super grateful for the awesome family I have!

In my last post, I promised a really good Top 10 for Charlie’s 6 month bday. I’m certain that I DID have a good idea for a top 10 list, but in the last two weeks it has slipped out of my brain. So, I’m going to give you a Top 10 “Random Things in the Life of a Littlefield” list that will also serve as a life update for you all.

10. Charlie is officially a crib-sleeper-inner! We’ve been working on the big transition from our room to his own room for about a month. Tonight, I’m very happy to share, he went down in his crib without a single cry, nor a single tear shed. My baby is a big boy!

9. You may have noticed that I had a blog post go viral. Yeah, it was shared on Facebook over 36,000 times and brought over 100,000 visitors to my new blog. I have no idea how it really happened. To be honest, I was just lashing out about my anger toward my lack of maternity leave. Partially, because the TIME Magazine cover pissed me off and partially because I was still really irritated with my former employer regarding my situation. The past few weeks with that blog have been a whirlwind, to say the least.

8. I can probably think of a million reasons why I shouldn’t be allowed to go viral on the internet. That list of reasons includes, but is not limited to, a.) My argumentative personality doesn’t bode well with dealing with stupid people that comment on blogs; b.) I have an incessant need to have the last word, also difficult with over 300 comments; and c.) I have a child to raise… and I have spent way more time approving comments and refreshing the website to count Facebook shares than I’d like to admit. Oh well.

7. Charlie pee’d and puked on Tristan, all within the same diaper change today. I laughed because it wasn’t me.

6. We started giving C-man solids a bit ago. Recently, I found these dissolving teething cookies and I just have to say, this makes me so excited to start real foods. He is so damn cute. 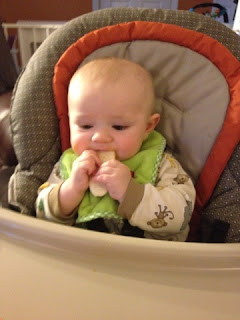 5. In starting my new job, we’ve finally decided to make leap to having Charlie fed formula at daycare. I am sad and relieved at the same time. I am still attempting to nurse at night and in the morning, but I was just not able to keep up with him during the day. Today was day one and I almost cried when I can home to see my pump, sitting there all unused and unloved. There are a million emotions and thoughts that come along with making this choice (which I fully intent to share in a new post) but for now, let’s just say that it is what it is.

4. There was a recent news story on a technique that “may” detect autism as early as 6 months. This irritates me, because you know every mother is now repeatedly doing this test to see if there child is exhibiting the signs of head lag. The story stated that “75 percent of high-risk infants exhibited the head lag, whereas 33 percent of low-risk infants did.” What they don’t tell you is the percentage of children with autism that never showed head lag – “About half (54%) of children with any social or communication delay showed evidence of head lag as infants.” (Source, WebMD) That means 46% don’t.

I think this would be a great test if it were more definitive (or, yes, in the cases where autism is prevalent in a family, it may be beneficial.) But the way it has been presented by the media seems to have only resulted in mild parental hysteria.

3. I really, really hope it’s sunny this Memorial Day weekend. I want to take Charlie swimming – he has never been swimming!

2. I can’t believe that in 2.5 weeks, I’ll have a 7 month old. He will be closer to 1 than to 0…where has the time gone??!! I have already started planning his first birthday party and I’m very excited! But, I’d still like time to slow the f%ck down please.

1. The biggest news of all in the past two weeks — We’ve got a tooth, people!! I’d snap a photo to share, but Charlie won’t let me see said tooth, because of his obsession with his tongue. This is all we get when we try to investigate — the tongue! 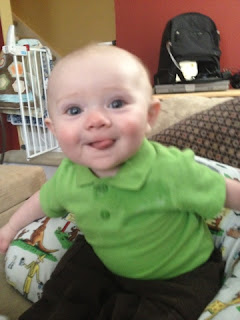 Well, I think that about sums up life for the Littlefield’s. Viral blogging, crib sleeping, eating, peeing and puking, growing up, and teeth. I hope your last couple of weeks have been as eventful as ours has been… minus the pee and puke part, of course.